Below is my young male Gibson Bull snake from 2013. He's a true jewel!

His parents are from wild collected stock of Antigua, Guatemala. 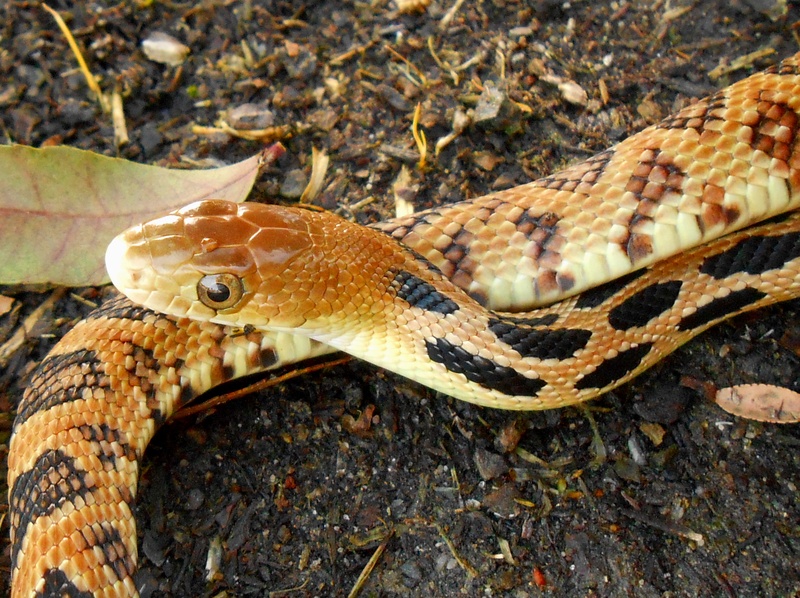 Below is my young female Gibson bull snake year 2013. She's also a jewel!

Notice that the 3rd pair of vertebral markings has the 1st bridge on her. You can also see that she's been rubbing her nose a bit. 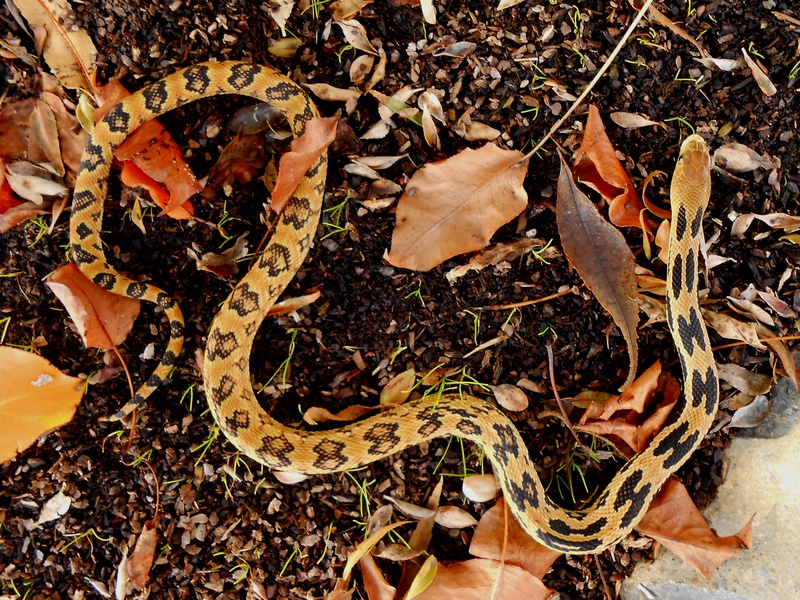 Below is a closeup digital image of my young male "gibsoni" viewing the anterior body from above. Notice the paired markings. 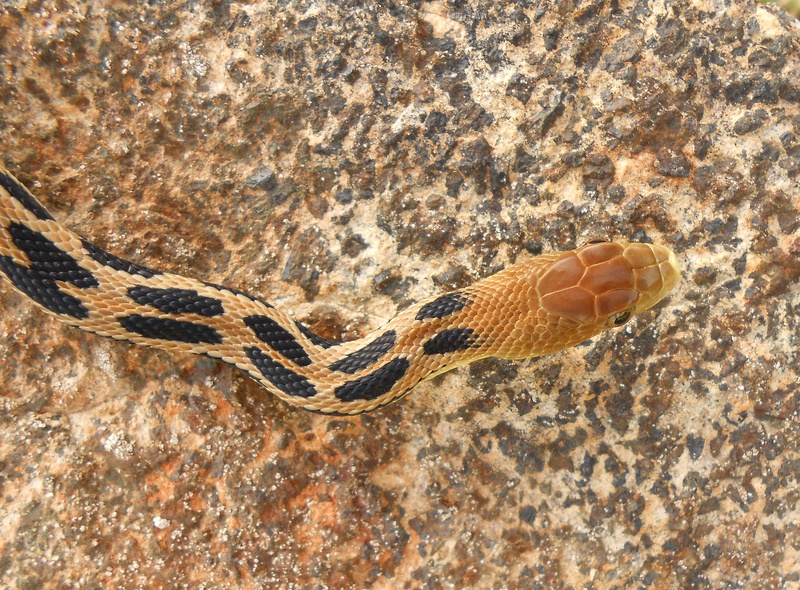 Below is another neonate "gibsoni" female from 2014. 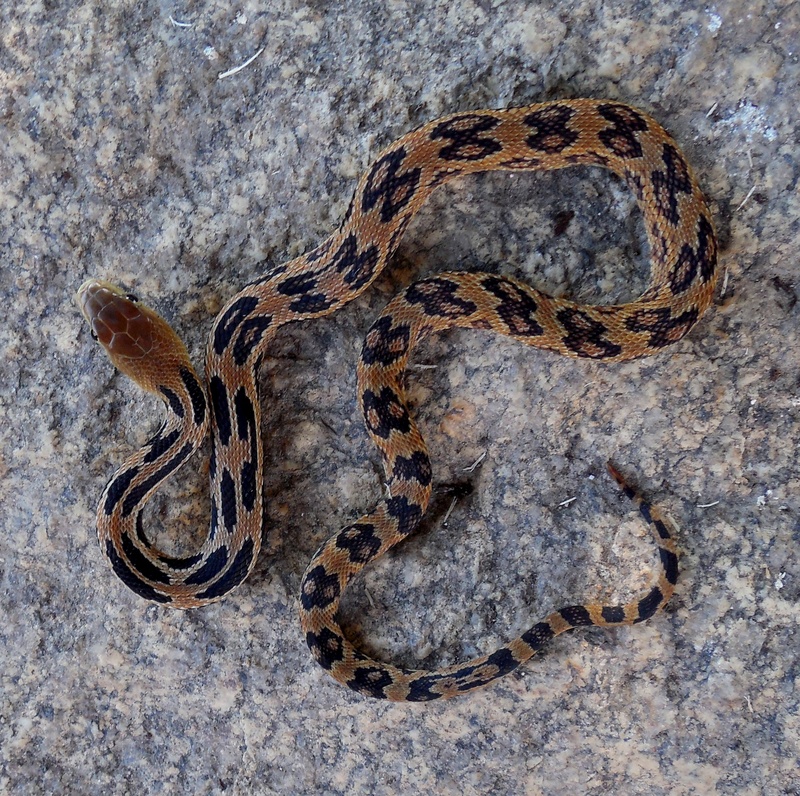 The "gibsoni" below is my 2014 neonate male I purchased from John Ginter who appears to be the first to successfully breed these in the U.S.

Unlike other colubrids, "gibsoni" are placed together in the fall season, laying before spring, with a long egg incubation period of more than 3 months. 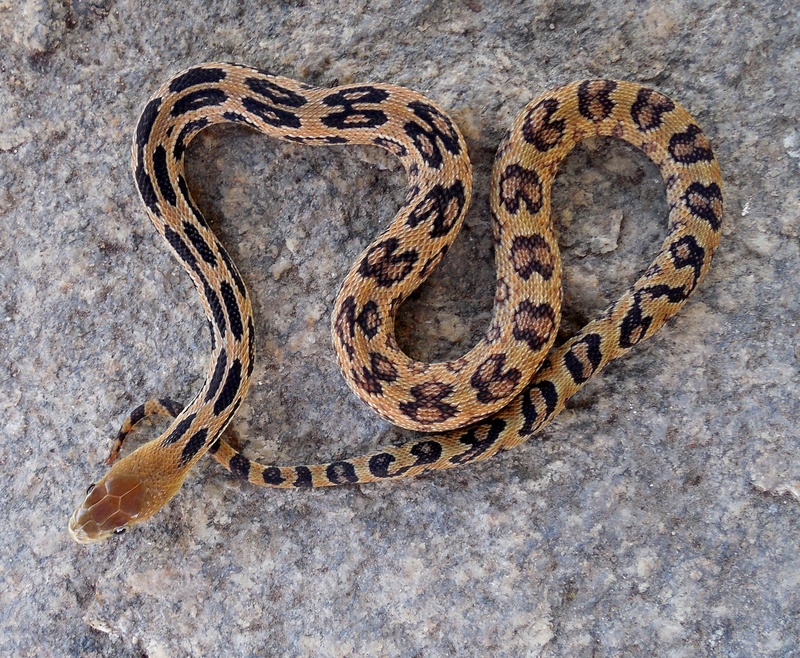 Here's an email from Pancho Gutiérrez to me with a video of a wild Gibson's bull snake from a ranch in Guatemala.

Lamento la tardanza, pero tuve serios problemas con mi PC, tuve que comprar una nueva y hasta ahora estoy poniendome al día con mis correos...
Sorry for how late it's been, but I had some serious problems with my PC. I had to buy a new one and up until now I've been at the post office everyday.
Adjunto el video que tomé en mi casa.
Along with this (email) is the video that I took at home.
Esto es en el cantón Tierra Colorada Baja, Quetzaltenango, Guatemala. Estamos  a +- 2,300msnm. Es un bosque pequeño, rodeado de granjas y sembradillos ,y
This area is in a region of lower red lands of Quetzaltenango Guatemala. We are at +- 2,300 mtrs above s.l. elevation. It's a small woodland area surrounded by farms and little
tristemente, minas. En el bosque hay mayoritariamente pinos, un poco de cipres y algunos eucaliptos. Hay ardillas, libre, mofeta, tacuazin (zarigueya), gato de monte y
fields, and unfortunately, mines. In the forest, there are mainly pines, a few cypress, and some eucaliptus. There are squirrels, rabbits, skunks, possums, cougars, and many birds.
muchas aves. Principalmente pájaro carpintero, paloma criolla, coronado, colibrí y una pareja de tecolotes.
Mostly woodpeckers, native doves, crowned hummingbirds, and a pair of owls.
Quisiera poder proteger y fomentar la reproducción de esta especie en este hábitat, por lo que te agradezco cualquier sugerencia al respecto
I'd like to be able to protect and promote the reproduction of this species in this habitat for which I thank you for whatever suggestion regarding it you may have.
En el video se aprecia bien la serpiente, hay mucho movimiento de la cámara, pero se debe a que me estaban temblando la manos (adrenalina por el susto). Noté que
In the video, the snake can be well apreciated, there is a lot of camera movement, but that's because my hands were shaking (adrenalin of fear). Notice that the tail is shaking rapidly
sacude la cola velozmente y hace un ruido como de cascabel al pegarse a si misma sobre el cuerpo...
and making sounds much like a rattler when it hits itself against its own body...
Here's a video of a wild Guatemalan Bull Snake from Quetzaltenango, Guatemala sent to me from Pancho from his farm house where he lives.
Disfruta!
I just identified a pituophis Lineaticollis gibsoni in my farm. I have a video, if you are interested ley me Know and Ill send it to you.
I live in Guatemala, in Quetzaltenango . 2,300 meters above sea level.

Duméril (1853: 453) described Elaphis deppei from a specimen in the Leiden Museum from "Mexico." This specimen, according to the type description, has 233 ventrals and 67 caudals. In 1863 Jan described Pituophis deppei var. pholidostictus, also with "Mexico" as the type locality. Subsequent authors (see synonymy of P. deppei deppei in Stull, 1940: 25) have treated pholidostictus as a synonym of deppei. Smith and Taylor (1950: 334) restricted the type localities of deppei and pholidostictus to San Juan Teotihuacán, México. Cope (1860: 369) described Arizona jani on the basis of a specimen in the United States National Museum from Buena Vista, Coahuila. Stull (1932: 2, 1940: 42), Smith (1944: 145) and Smith and Taylor (1945: 107) considered jani as a northern subspecies of Pituophis deppei. Arizona lineaticollis was described by Cope (1861: 300); the type, which originally was in the Academy of Natural Sciences of Philadelphia and is now lost, was said to have come from Jalapa, Veracruz. This locality probably is in error. Smith (1943: 460) placed lineaticollis as a southern subspecies of deppei. Schmidt and Shannon (1947: 79) described Pituophis deppei brevilineata on the basis of five specimens from Tancítaro, Michoacán, and Stuart (1954: 172) described Pituophis deppei gibsoni from seven specimens from Departamento Chimaltenango, Guatemala. Thus, at present five subspecies of Pituophis deppei are recognized.(Of course, this has changed since the writing of this paper long ago.)  For references, see the site above.

Diagnosis (gibsoni): This race is characterized by paired, elongated, pale-centered, paravertebral spots on the anterior part of the body. Posterior to the paired spots are 22 to 27 dorsal body-blotches; these and the lateral intercalary spots have pale centers. There are 234 to 246 ventrals and 57 to 65 caudals [DUELLMAN 1960]. 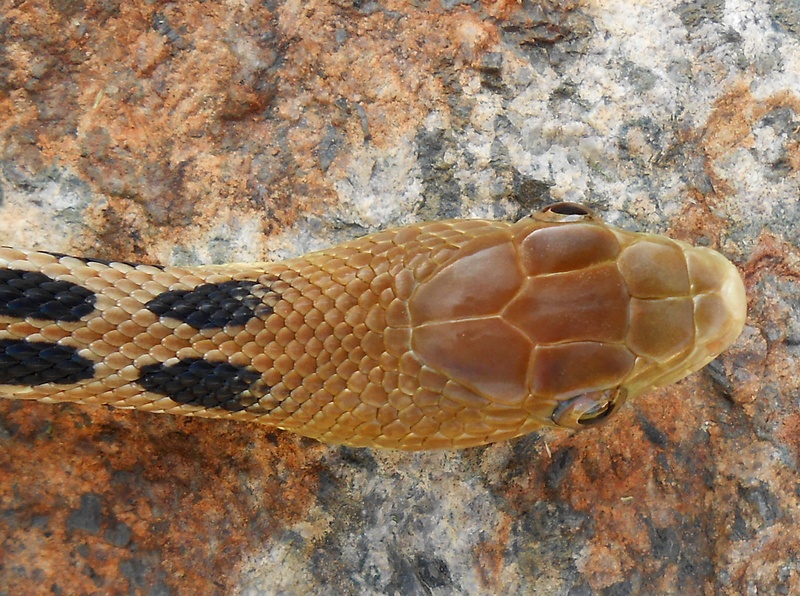 One of the Cope's or Middle-American Pituophis races,

The Guatemalan or Gibson Bull Snake is named after Colvin Gibson, the collector of the first or "holotype" specimen. Type.--UMMZ 107060 was collected from near Yepocapa, Dpto. Chimaltenango, Guatemala; at 1430 meters in 1927. The native Guatemalans used to call it the "Mazacuata de Tierra Fria" which means "large snake of cold lands". It is rarely seen in common literature or photographed. This lesser-known race is indigenous to moderate and intermediate elevations of the Pacific versant of western Guatemala and from the Caribbean versant of the Sierra de los Cuchumantanes or the adjacent highlands region near San Cristobal, Chiapas, Mexico(Duellman 1960). Although they are reported to eat the local rodents, birds and their eggs, as young snakes, they may also feed on lizards. Very little is known regarding reproduction of gibsoni, but apparently, there are a few entusiasts having obtained permits, have brought some of these reptiles to the United States in Los Angeles, California and Arizona to attempt breeding this rare ophidian jewl. Carl Franklin, a biologist from Texas, also a researcher, has produced eggs from animals that he has worked with. John Ginter, a researcher and collector has produced eggs in 2013 after breeding in the winter instead of the spring as is common for most Pituophis forms. I understand Tom Moisi and his friends have also produced young in 2013. This subspecies also has darker or similar light brown ground coloration as many of the nominal lineaticollis individuals, with paired black, elongate  PARAVERTEBRAL SPOTS or markings on the anterior and mid-region of the body numbering 22-27, and with PALE-CENTERS  found within the upper dark twin touching spots at the mid-body region and within the lateral intercalary spots on each side. (The nominal P. l. lineaticollis is slightly different in this aspect among others, because it usually sports UNBROKEN or very few divisions or splits through the STRIPES anteriorly). This species is also one of the few Pituophis that have 2 prefrontal scales instead of the trademark 4. Guatemalan Bull Snakes number 234-246 ventrals and 57-65 caudals.

Below is a a digital image study of a young male Gibson's bull snake body viewed from above.

This animal came from parents of Antigua, Guatemala. Note the paired markings and the 1st bridge on the 5th pair. 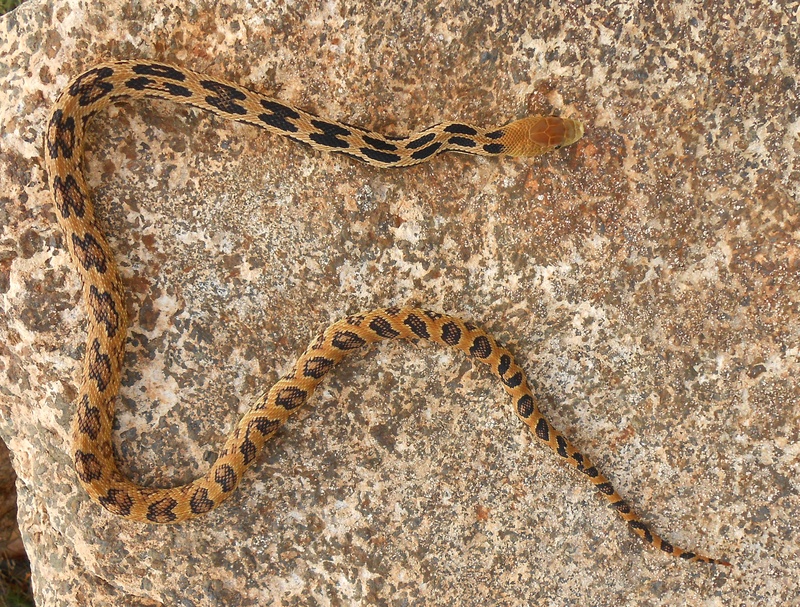 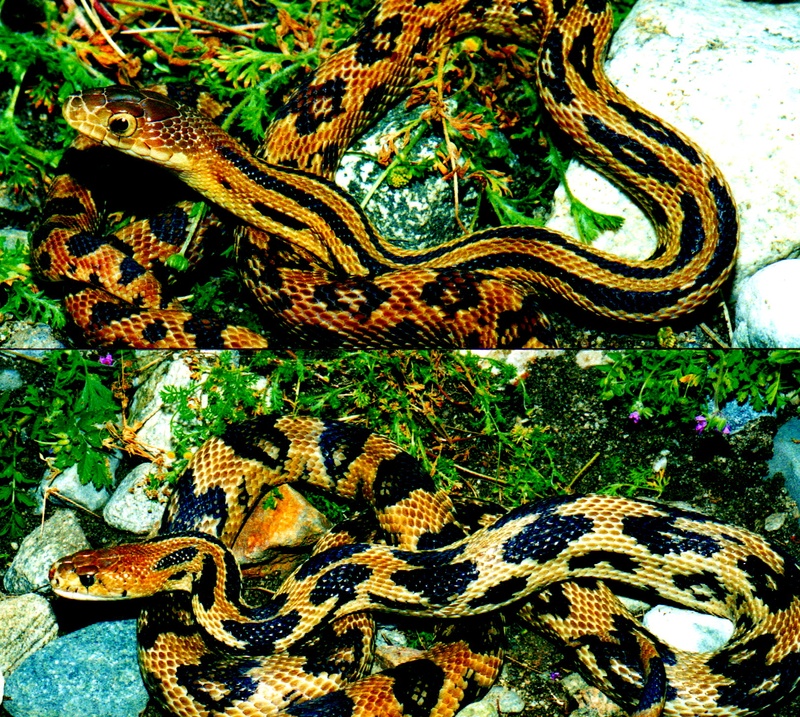 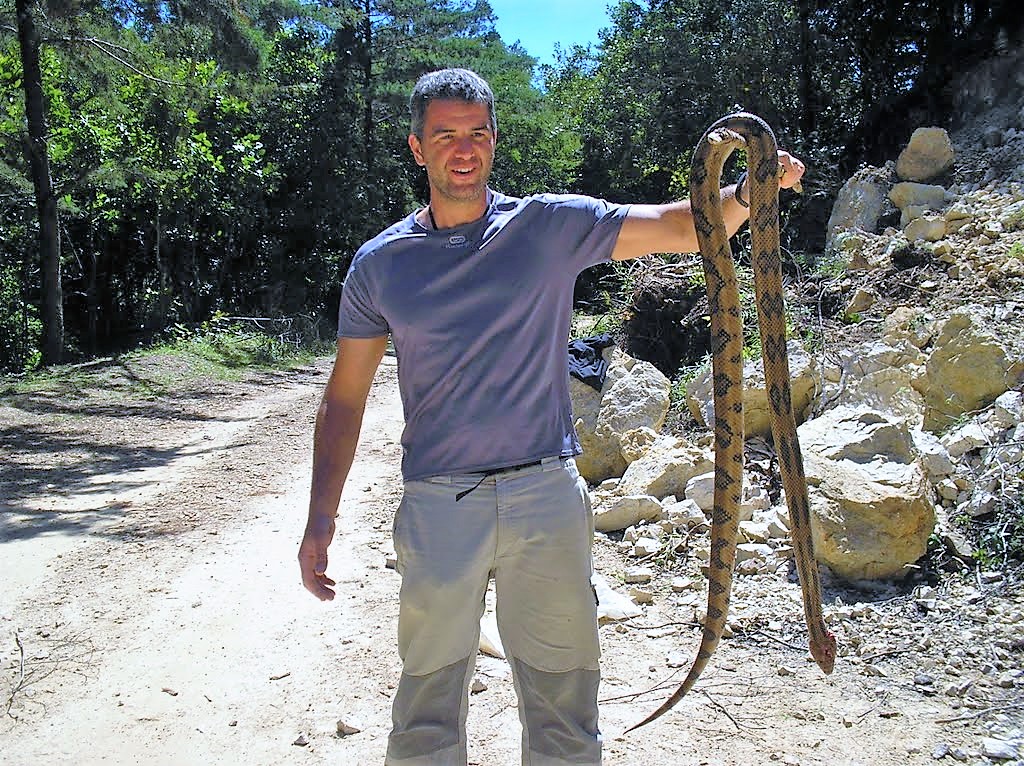 John Ginter has produced gibsoni eggs in 2013 per  personal communication cell phone to me. They hatched in April. I bought a pair.

Collector-Researcher John Ginter also has produced eggs for gibsoni per communiction by phone to Pat Briggs in April 2013. 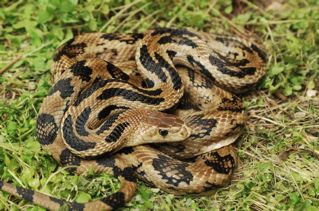 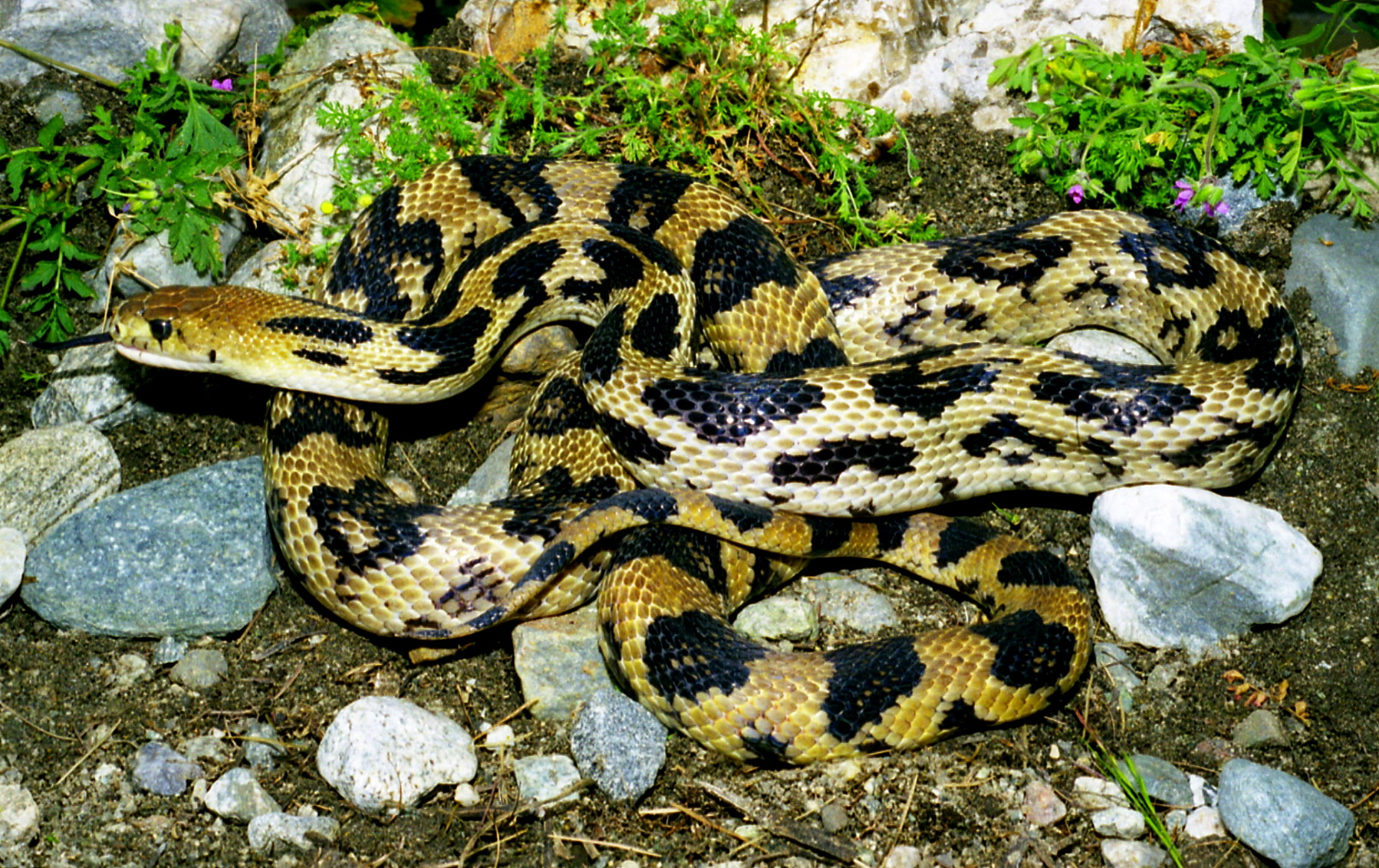 After 7 years of effort we were finally able to produce Gibson's gopher snakes! They spent 93 days in the egg but finally emerged a few weeks ago (April, 2013)  and are already eating rat pinkies. They are offspring of legally obtained Antigua Guatemala locality founders. Much thanks to my good friend Danny for all his help in this accomplishment. 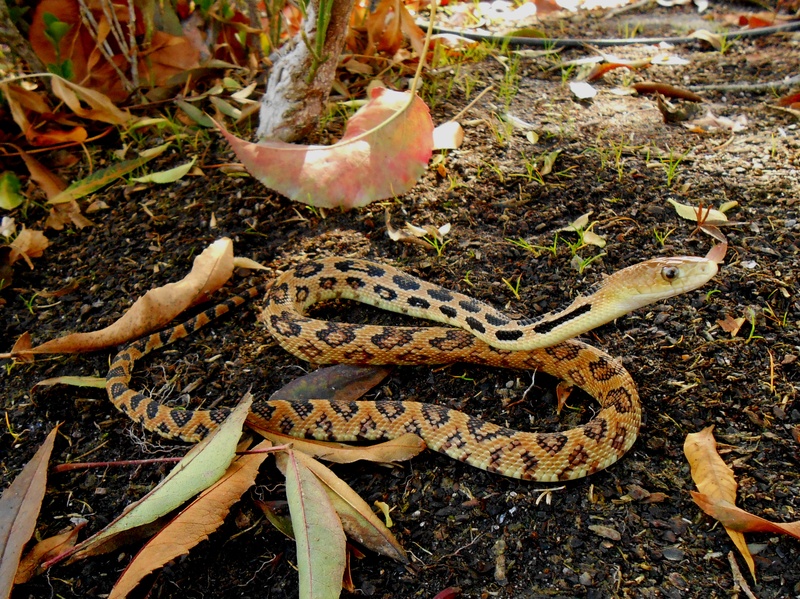 Check out this beautiful head study by Chris Harris by clicking the red for the site below:

Check out fauna classified below advertised:

2013 Hatchling Pituophis l. gibsoni
Never before available in the USA or Europe. We are offering 2.2 Gibson's Guatemalan pine snakes for sale. These hatchlings are the offspring of unrelated, legally imported Antigua Guatemala locality parents and are established and feeding on rat pinks. We are asking $1,000 each shipped within the continental US and may be able to provide delivery to the Hamm DE show.

( Specimen Below Collected From Guatemala City) 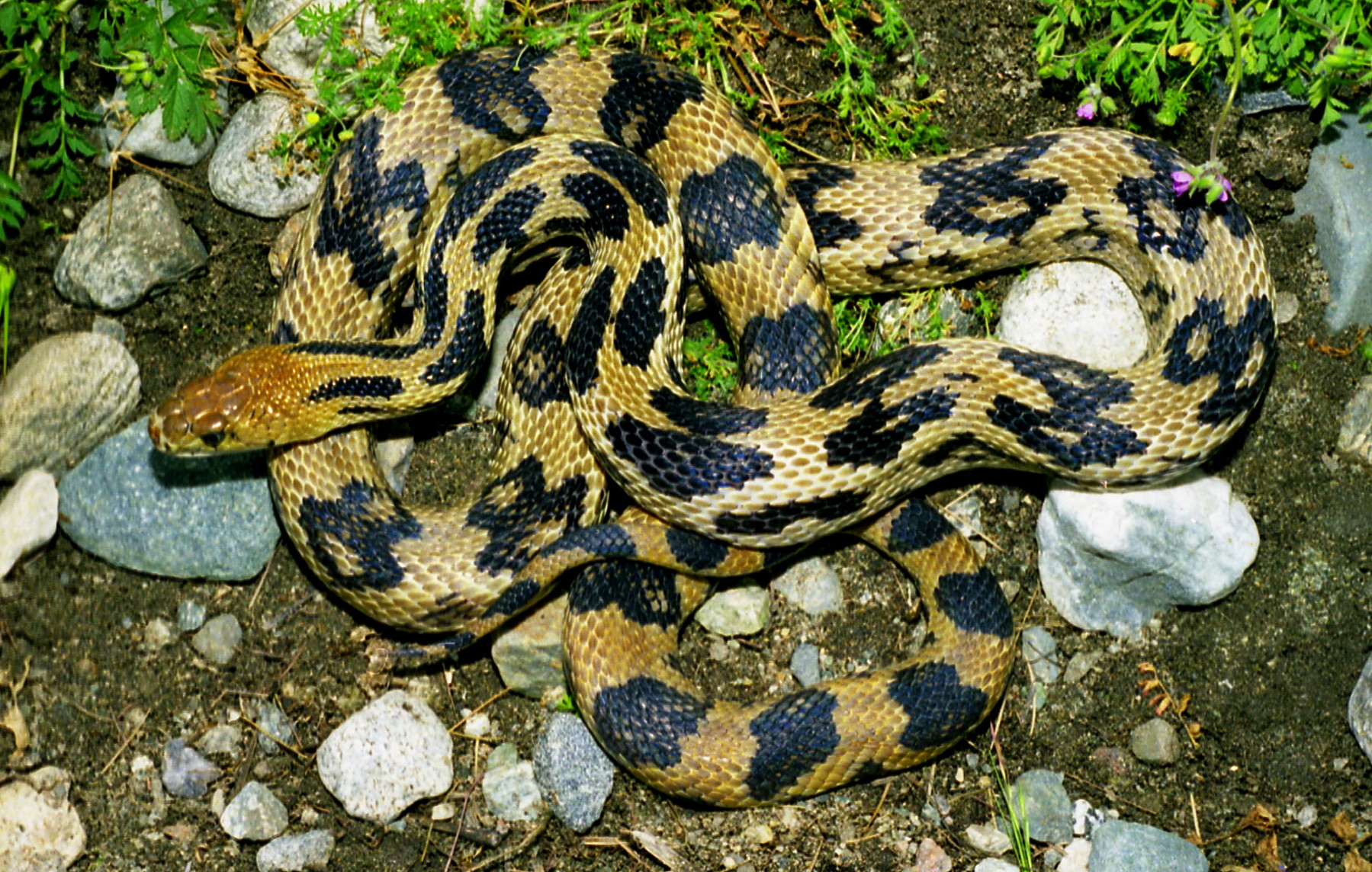 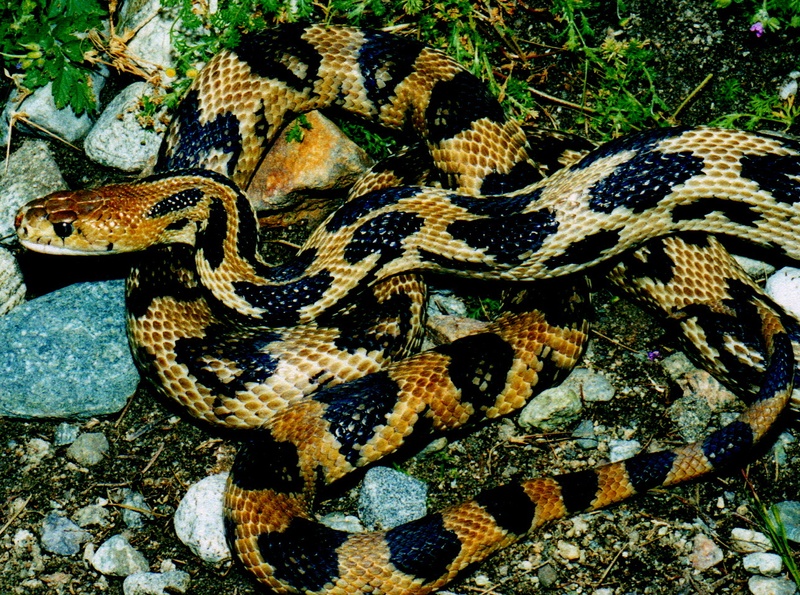 Notice the pairs of apical pits visible near the tips of each light scale. 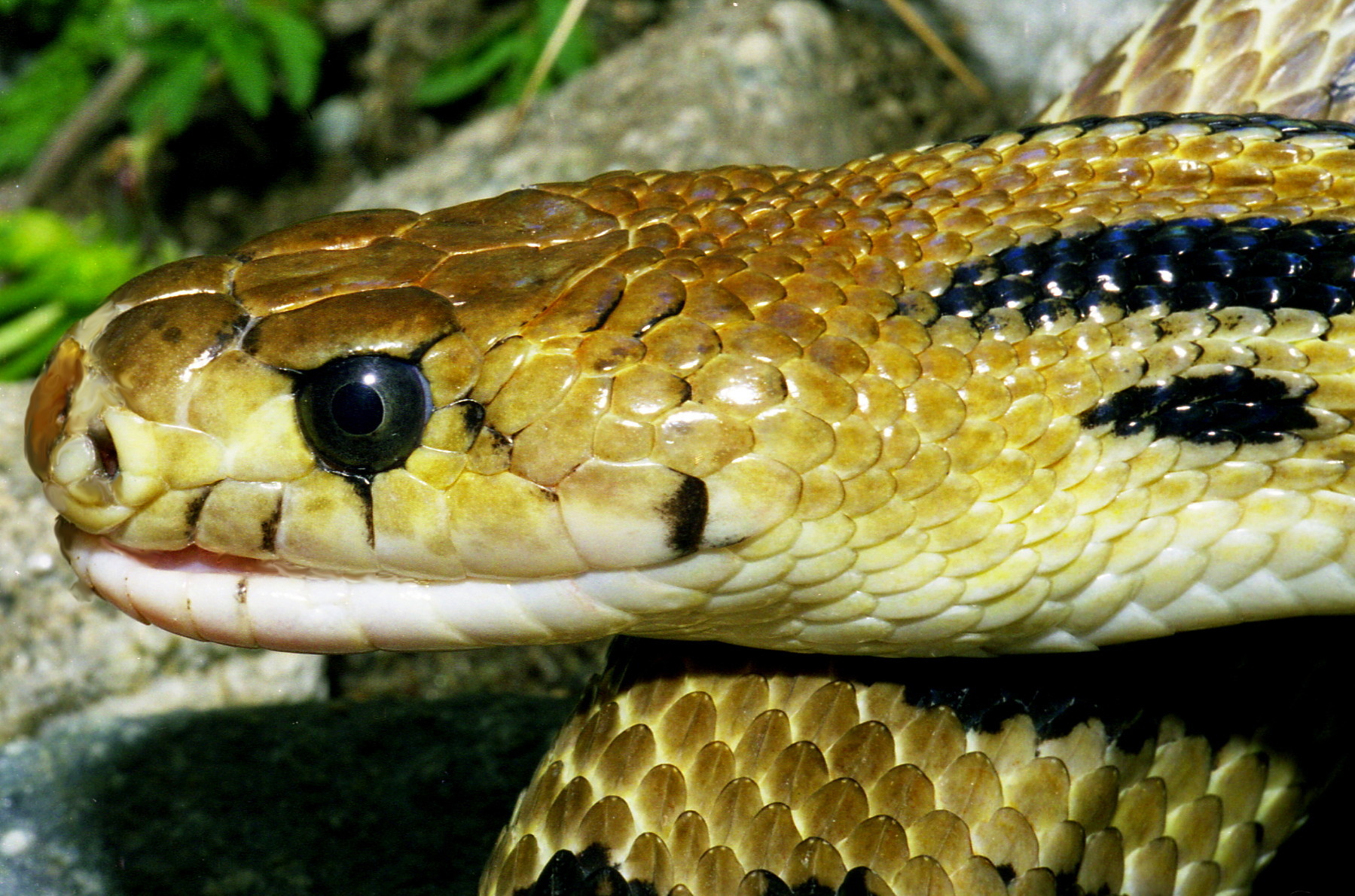 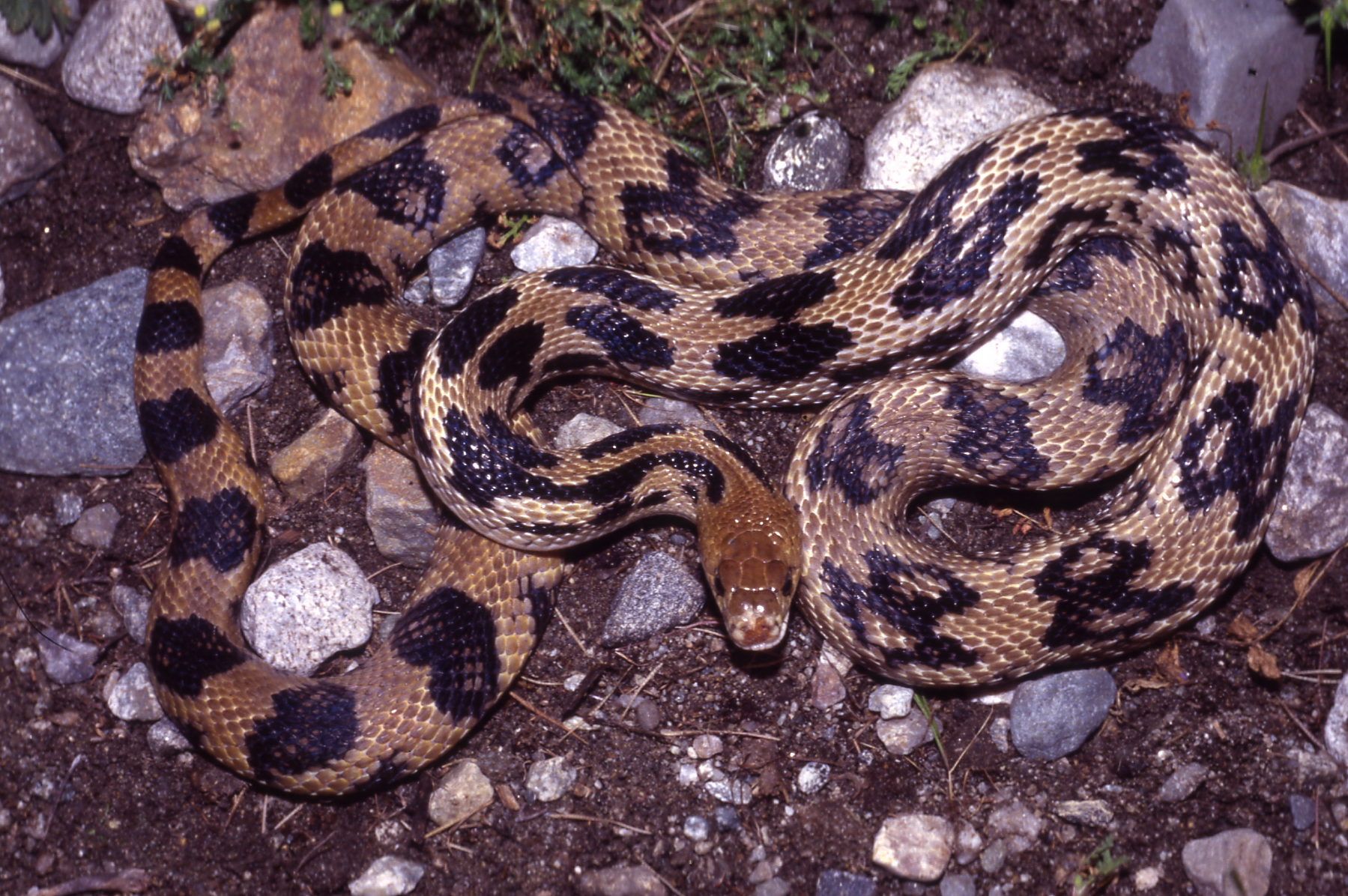 A Taxonomic Study of the Middle American Snake, Pituophis deppei

Pituophis lineaticollis gibsoni Stuart, new combination
Pituophis deppei gibsoni Stuart, Proc. Biol. Soc. Washington, vol. 67, p. 172, August 5, 1954.
Type.—UNIVERSITY OF MICHIGAN MUSEUM OF ZOOLOGY NO. 107060, OBTAINED BY COLVIN GIBSON. TYPE LOCALITY: YEPOCAPA,
Chimaltenango, Guatemala.
Diagnosis.—THIS RACE IS CHARACTERIZED BY PAIRED, ELONGATED, PALE-CENTERED, PARAVERTEBRAL SPOTS ON THE ANTERIOR PART OF
THE BODY. POSTERIOR TO THE PAIRED SPOTS ARE 22 TO 27 DORSAL BODY-BLOTCHES; THESE AND THE LATERAL INTERCALARY SPOTS HAVE
pale centers. There are 234 to 246 ventrals and 57 to 65 caudals.
Variation.—THE FEW SPECIMENS THAT ARE AVAILABLE FROM A SMALL GEOGRAPHIC AREA DO NOT PERMIT A DISCUSSION OF GEOGRAPHIC
VARIATION AT THIS TIME. ALL OF THE SPECIMENS HAVE THE PAIRED PARAVERTEBRAL SPOTS AND BLOTCHES WITH LIGHT CENTERS. IN THIS
RESPECT THE POPULATION OF lineaticollis EAST OF THE ISTHMUS OF TEHUANTEPEC IS NOTICEABLY DIFFERENT FROM THE NOMINAL
SUBSPECIES IN THE MEXICAN HIGHLANDS. SMITH AND TAYLOR (1945: 108) LISTED A SPECIMEN FROM SAN CRISTOBAL, CHIAPAS. I
HAVE NOT SEEN THIS SPECIMEN AND SO DO NOT KNOW TO WHICH SUBSPECIES IT BELONGS. ON GEOGRAPHICAL GROUNDS IT PROBABLY IS
gibsoni.
Distribution.—GUATEMALAN HIGHLANDS AND PROBABLY HIGHLANDS OF CHIAPAS. ASIDE FROM THE SPECIMENS EXAMINED, TWO
OTHERS ARE KNOWN—ONE FROM VOLCÁN AGUA, SACATEPEQUEZ (SLEVIN, 1939: 400), AND ONE FROM DUEÑAS, SACATEPEQUEZ
(Boulenger, 1894: 65); these localities are not shown in figure 1.
Specimens examined.—EIGHT, AS FOLLOWS: GUATEMALA: Chimaltenango: CHICHAVAC, CNHM 1927; FINCA EL TESORO, 3 KM.
SE OF ACATENANGO, UMMZ 107062-3; FINCA RECREO, 4.5 KM. SW OF YEPOCAPA, UMMZ 107381; RÍO LOS POSITOS, 5.5 KM.
NE OF YEPOCAPA, UMMZ 107061; RÍO SOBOLOPOP, 8 KM. W OF PATZÚN, UMMZ 107064; YEPOCAPA, UMMZ 107060. El
Quiche: Nebaj, UMMZ 89202

For ADVANCED PITUOPHIS HERPETOCULTURISTS, HERPETOLOGISTS, or other ENTHUSIASTS only, see the site address below for some excellent scientific follow up information on this genus of ophidians: http://www.sociedadherpetologicamexicana.org/uri/museo/pituo.pdf 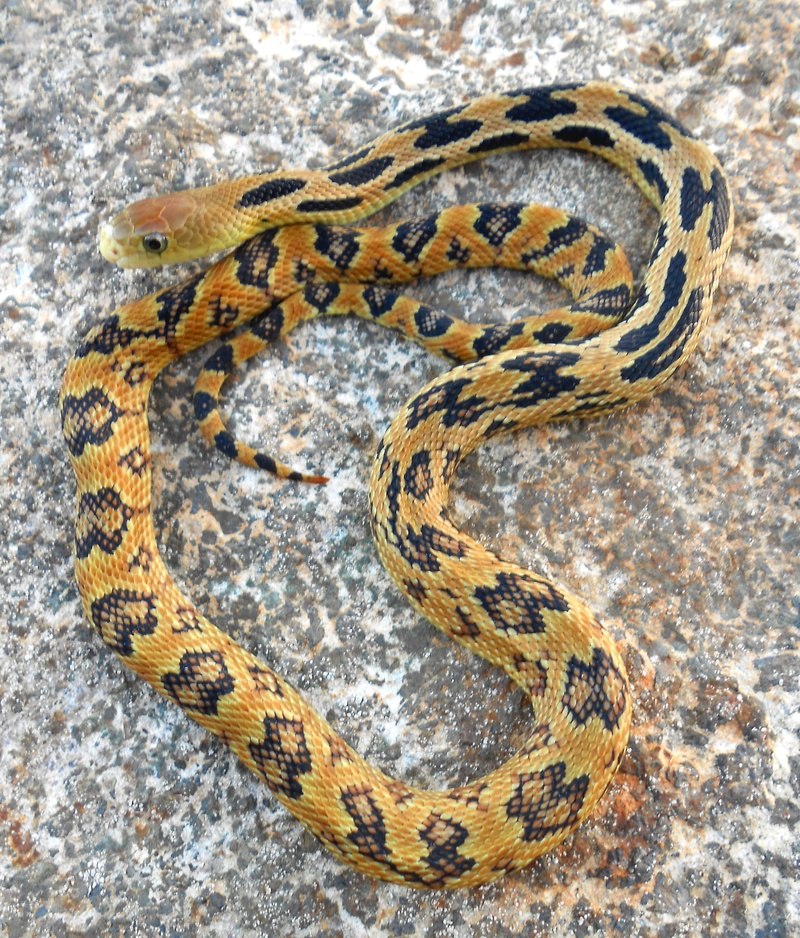 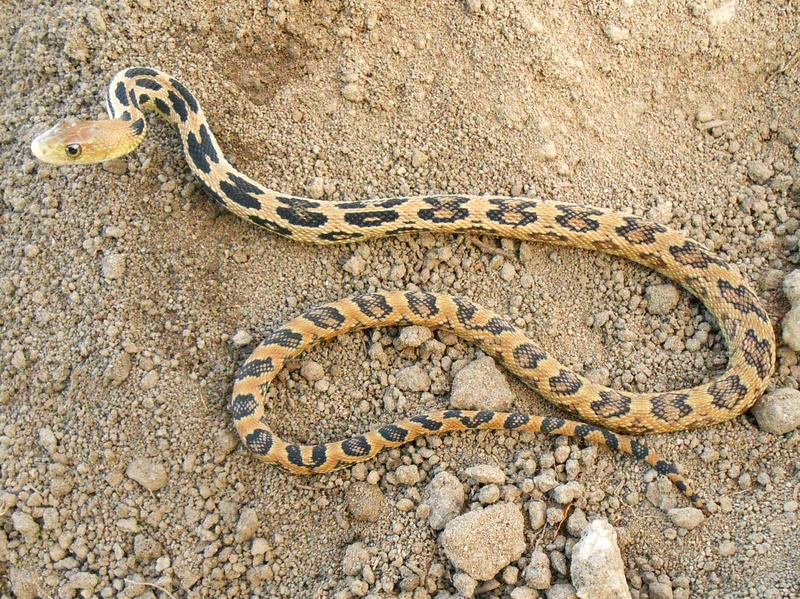